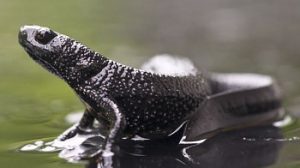 Salamanderen (the newt), with its strong mating colors, has always given a strong magical appeal, near the line concerning the shapeshifting fairy musician “Nykkjen”. In work involving alchemy the newt represent, together with other gargoyles, the elementary spirits:

Hatlestrand has got Northern Europe’s largest deposit of the rare and protected “storsalamander”.
Locally, they always been named as lizards (oegler). Formally, today they are reckorded as amphibians.
In the long term we calculate that the salamander will establish itself in Lundarhegni Nature Park. Today it is easyest to find in Geitaknottane Nature Reserve, a pretty remote place. If you want to avoid a wasted journey, we advise to use a guide.

Deer Safari
Hatlestrand and Oelve is important areas for wild deers. Lundarhegni do not convey hunting with guns. Such hunting are neither allowed inside the park. But since the deer feels relatively safe there, and since they migrate through, camera hunting perform well.
Leit summer and autumn is best time for deer safari. Guided tour can be recommended.

Eikelandselvi
We follow the river of Eikeland, from it’s mouth in Hjortaasvaagen to it’s birth place in Trodladalen (the valley of trolls).

Quarries
Are the old pyrite slate quarries of Hatlestrand and Oelve hiding remains of one of the first industrial activities in Norway?
Baking plates, grinding stone from Gotland and rock of glas  *

Mannahidlaren (The cave of the man)

Svartedauden 1349 (The Black Death, a local legend)
Today (2016), the population of Hatlestrand is about 450. It is not unlikely to suggest that the population reached the same level prior to the plague. In any case names of the main farms were all there and the same like today. Probably the farmes they were not devided so much. Therefor on each farm there were many people, much more then today. – One legend tells that when the plague had finished it’s ruthless work, one could see smoke comping out from not more than three houses at Hatlestrand!

King of Lundarhegni: “The book of legends” 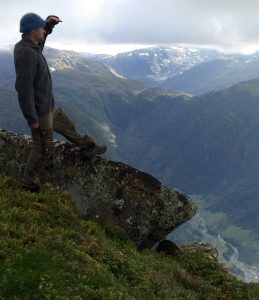 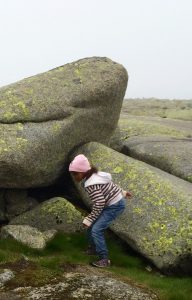 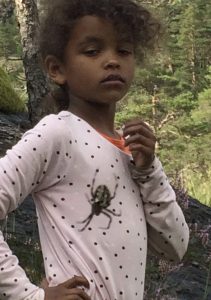 Order:
If you want to bring with you local historian / wizard / expert / storyteller on the walks or by the campfire, search this up in CONTACT
For advanced climbing and glacier walks, we can send a request to “Bratt Lende“, company with certified mountain guide.